The Epitaphios of Cozia Monastery

The Epitaphios of Cozia Monastery 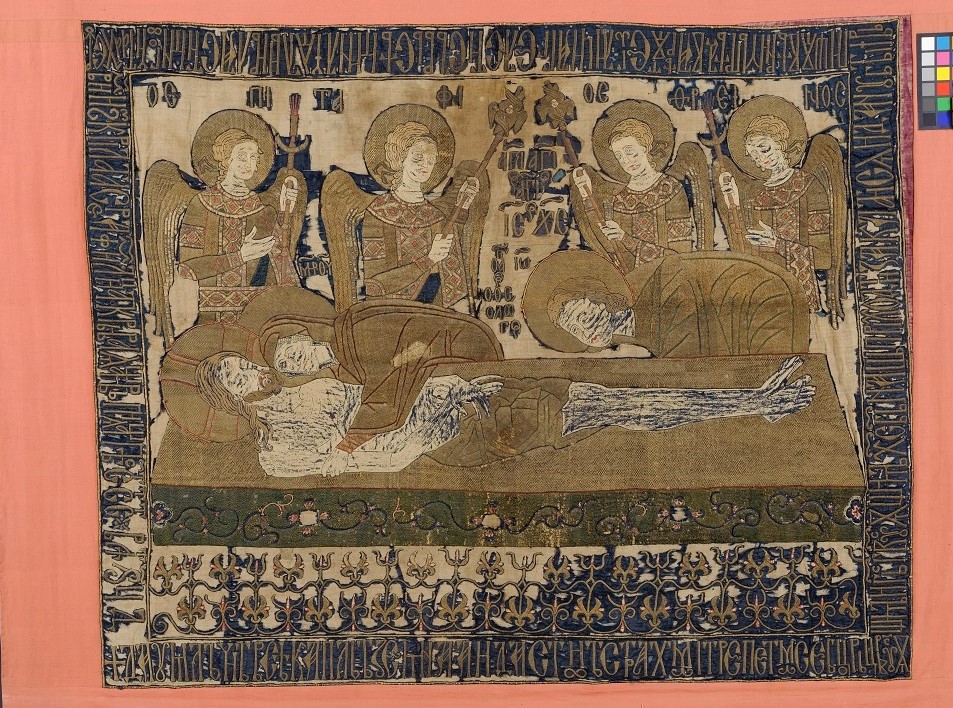 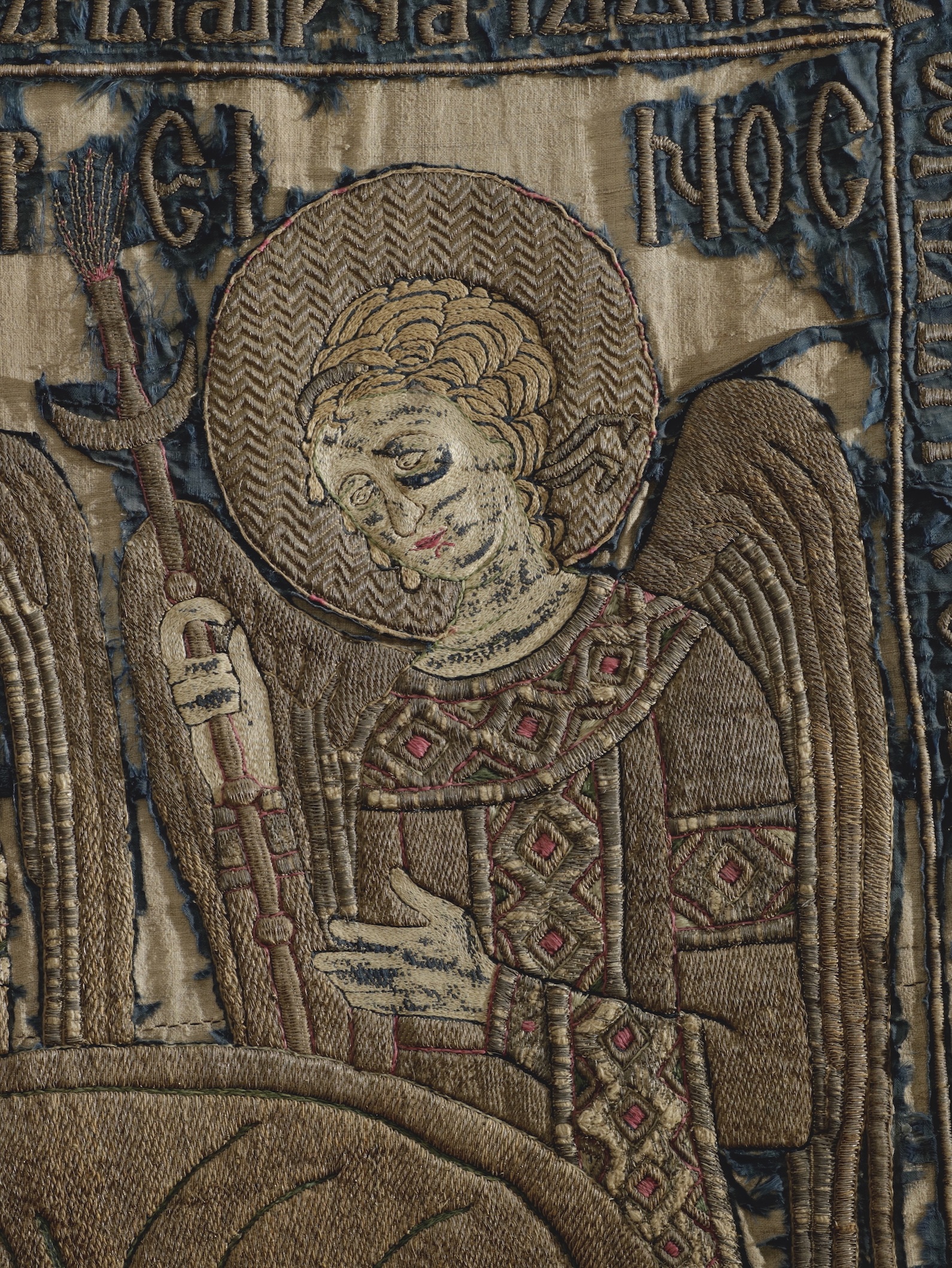 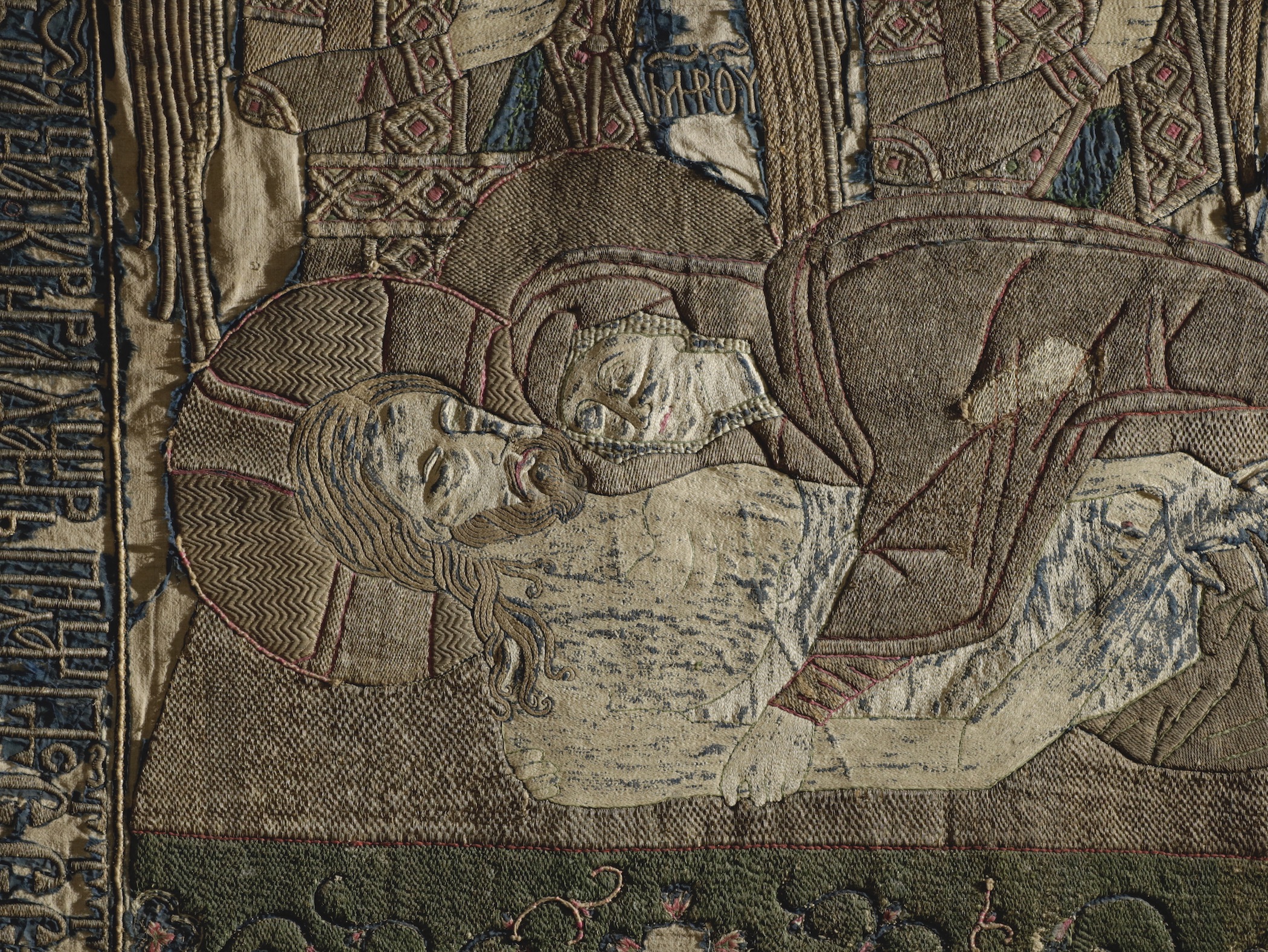 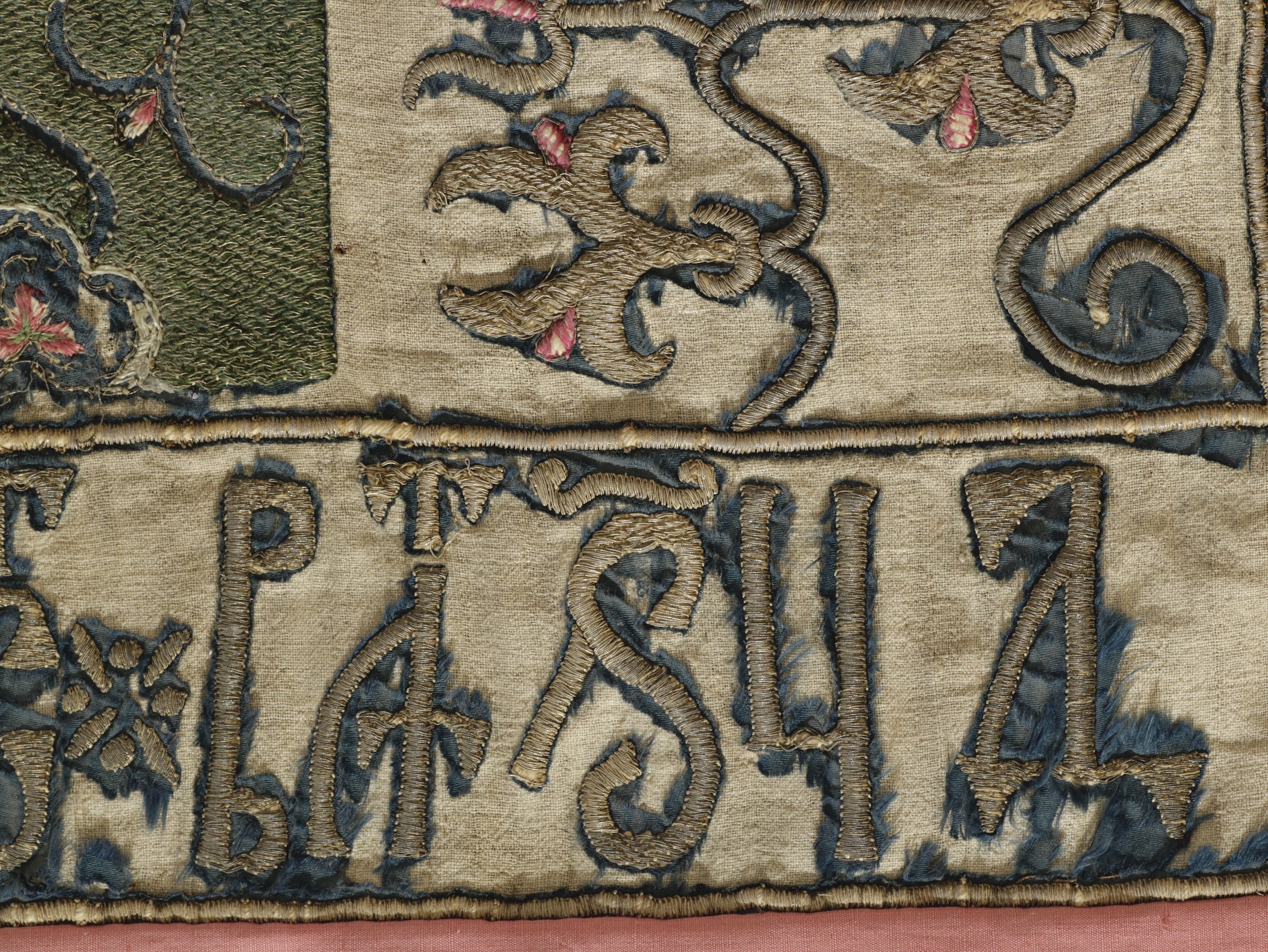 By Emanuela Cernea | National Museum of Art of Romania

The embroidery (187 x 154 cm; 169 x 136 cm), on display in the National Museum of Art of Romania, Bucharest (Inv. no. 15826/B 181), was discovered in 1860 inside Cozia Monastery by archeologist Alexandru Odobescu during the first governmental scientific mission for inventorying the medieval patrimony of the Romanian Principalities. After its discovery, the embroidery was transferred to the National Museum of Antiquities in Bucharest.

The blue silk used as a chromatic support for the golden thread decoration survives only partially, and it is highly deteriorated. It is possible that pearls or precious stones were originally added to the embroidery, since we are able to distinguish the remains of the threads used to fix them onto the contour of the decorations.

The embroidery is dated according to the inscription that runs along the border, which, in the bottom left corner, displays the year 6904 / 1396 (Anno Domini). Although in publications from the first half of the 20th century it appears dated as 6930 / 1422, this reading error can be explained by the fact that, for a period of 40 years, the embroidery was unavailable to researchers, being evacuated to Russia along with 39,320 other cultural goods that were part of Romania's Thesaurus, sheltered there during the First World War (between 1916-17 and 1956). Studies of the piece during this long period of time were only indirectly realized, through older publications or archived images, and thus the last number of the Byzantine date, respectively Δ(04), could be misspelled as Λ(30). The error was amended after the year 1956, when the piece was returned to Romania.

Specialists unanimously consider the Cozia epitaphios to be exemplary in its iconographic scheme, it being the oldest dated epitaphios in which the scene of Christ's Mourning incorporates historical figures in addition to celestial beings. Its unique iconography brings together, near the catafalque, the angels bearing liturgical fans and candles, performing the sacrament of the Eucharistic sacrifice, as well as two of the historical figures most affected by the earthly drama of Jesus' death: the Virgin Mary and the young Apostle John. This iconographic transition is associated by researchers with the Orthodox liturgical innovations of the Holy Week, which had an immediate artistic effect in the creation of the epitaphios – a processional veil specifically conceived for these particular rituals.

Because the moment in which these first epitaphioi appeared cannot be precisely identified, although it can be seen that they take over the form and the iconography of the aërs, used during the Great Entrance, certain researchers have labeled the oldest epitaphioi as aërs-epitaphioi and admitted that, for a long time, these had served both liturgical functions, that of aërs with the symbolic image of the Eucharistic sacrifice - Christ Amnos - and that of epitaphios, by introducing the representation of the Lamentation at the tomb (Threnos). The functionality of the two types of embroidery will be differentiated in time through the attenuation of the symbolic message of the aërs in favor of the narrative meaning of the epitaphios, which will expand onto the evangelical episode of the Lamentation and Burial of Christ through a multitude of characters, topographical details or props.

In the context of the Byzantine liturgy renewal, the Cozia epitaphios emphasizes the relationship between the iconographic innovations of this type of liturgical veil and the new Orthodox Church’s services of the Holy Week. The inscription embroidered along its edges - Let all mortal flesh be silent – which reproduces a special prayer uttered only during the new mass of the Holy Saturday is used for the first time on a Byzantine embroidery and could signify the moment of a major shift in the meaning and function of the aërs. The same prayer will later be found on epitaphios on which the iconography is solely concentrated on the illustration of the historical drama of Christ’s death, like on the Bloomington (1535) or the Cotroceni (1680) epitaphioi, both executed in Walachia and most probably using the inscription on the Cozia epitaphios as a model. It is remarkable, nevertheless, that despite all of the iconographical or textual innovations, the Cozia epitaphios is strongly connected to the symbolism of the aërs. The representation of Christ as the Eucharistic Sacrifice is underlined by the presence of divine ministers and even more so by laying His body on a richly decorated support that cannot be associated with the shroud, nor with the Stone of Unction, instead looking more like an altar table.

Another important aspect of the Cozia epitaphios is the blue color of the silk support, used exceptionally in the oldest byzantine embroideries known today, such as the famous epitaphios gifted by John Cantacuzino to the Vatopedi Monastery, around the middle of the 14th century. The rarity of the fabric and the imperial symbolism of the blue color allows us to associate this embroidery with a prestigious workshop of the late Byzantine cultural sphere. Its inscription indicates that the piece was dedicated to a South Slavonic speaking liturgical space, like Wallachia, probably being, as the legend goes, a gift offered by Mircea I the Elder (r. 1386-1418) to his new foundation at Cozia Monastery. Even though it was produced in a foreign workshop - a Byzantine or a Serbian one - certain details of the Cozia epitaphios passed on to some Wallachian embroideries produced since the beginning of the 16th century, which suggests its presence in Wallachia just after its creation.

Slavonic inscription, along the border: "Let all mortal flesh be silent and stand in fear and trembling, for the King of kings and Lord of lords Christ our God comes to be slaughtered and given as food to the faithful. Before Him go the choirs of angels with all the principalities and powers, the cherubim with many eyes, and the six-winged seraphim covering their faces and crying the hymn Holy Holy Holy. In the year 6904." (transcription by Ruxandra Lambru)

One of the oldest studies regarding the Byzantine aërs and epitaphios with a detailed description of the Cozia epitaphios. (esp. p. 9, plate 2)

First mention in a book related to its former public presentation during the Paris International Exhibition in 1867. (esp. p. 82, 38)

A deep survey on the style, technique, iconography and cultural significance of the Byzantine and post-Byzantine aëres and epitaphioi.