The Episcopal Church of the former Monastery of Curtea de Argeș

The Episcopal Church of the former Monastery of Curtea de Argeș 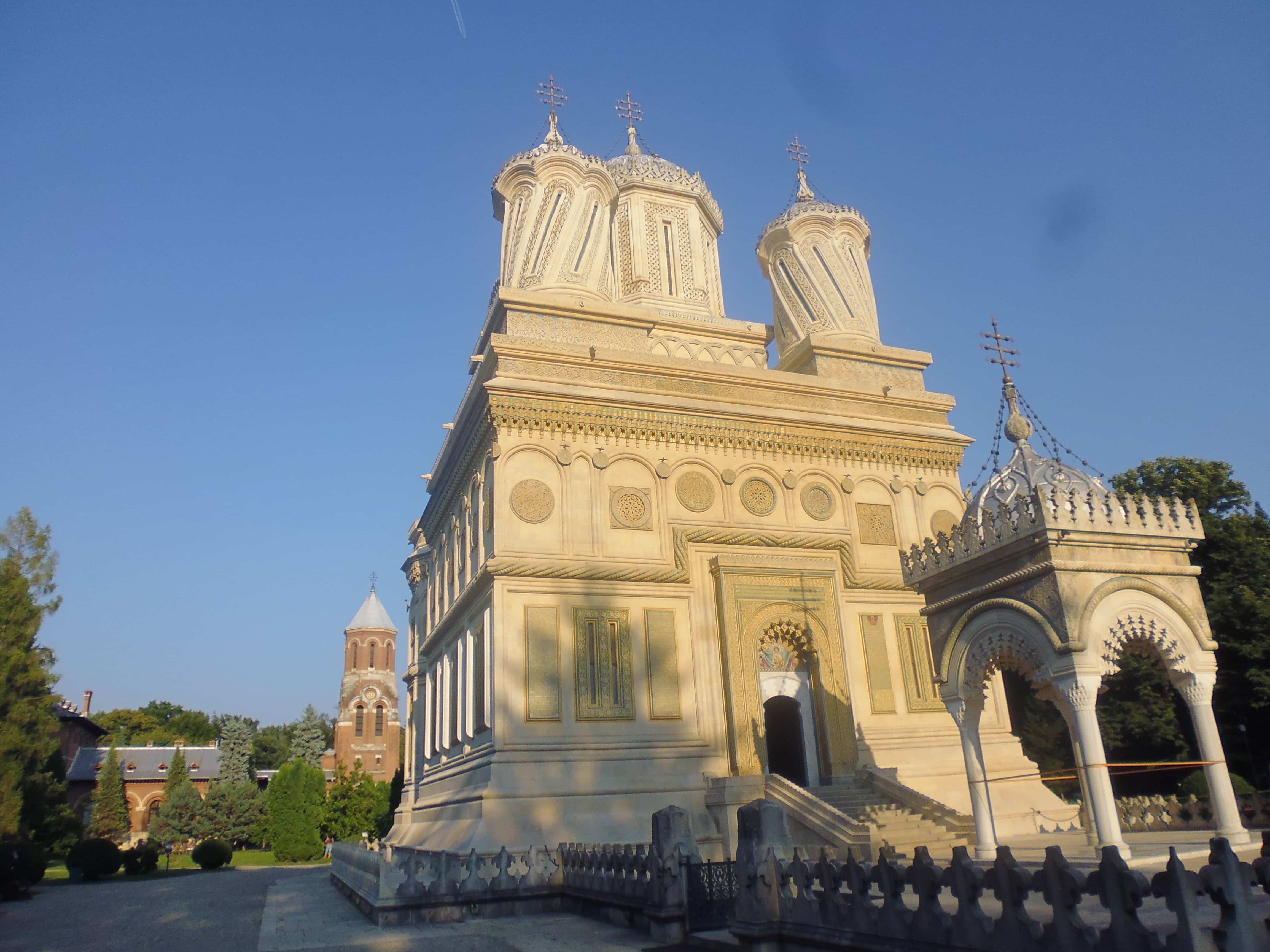 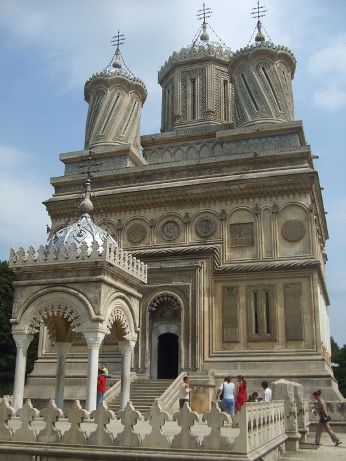 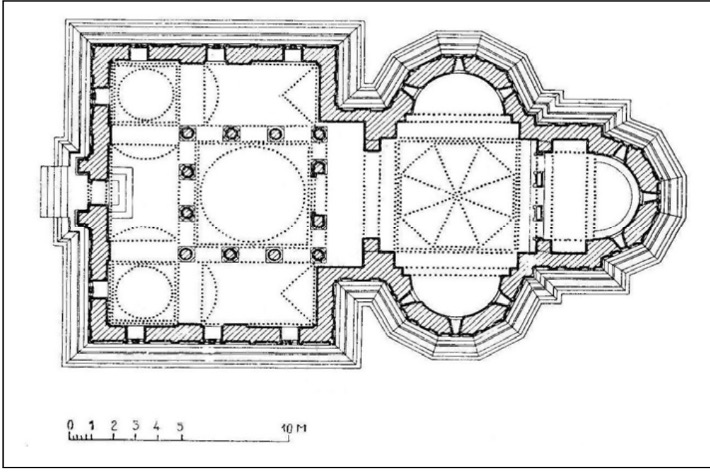 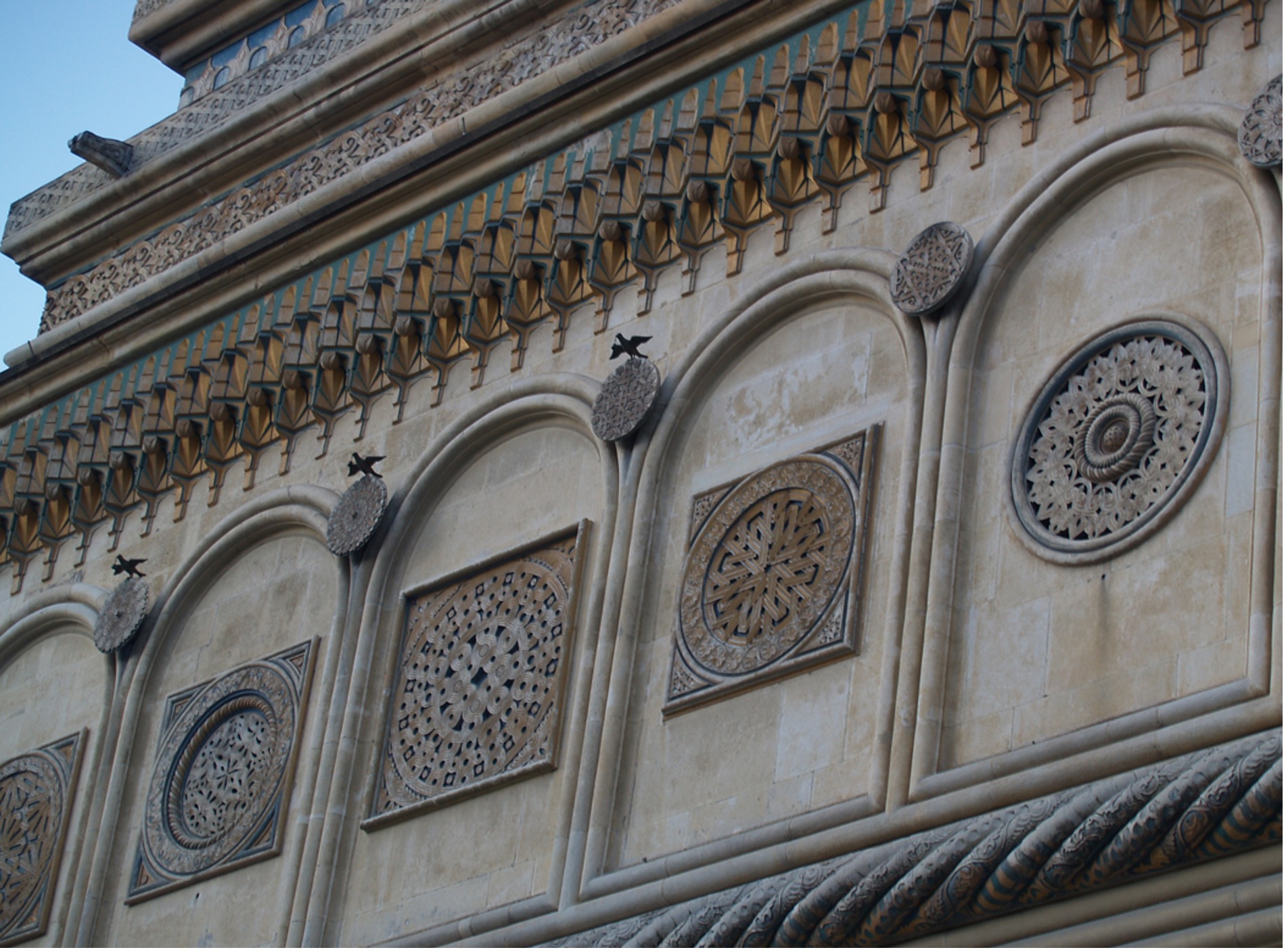 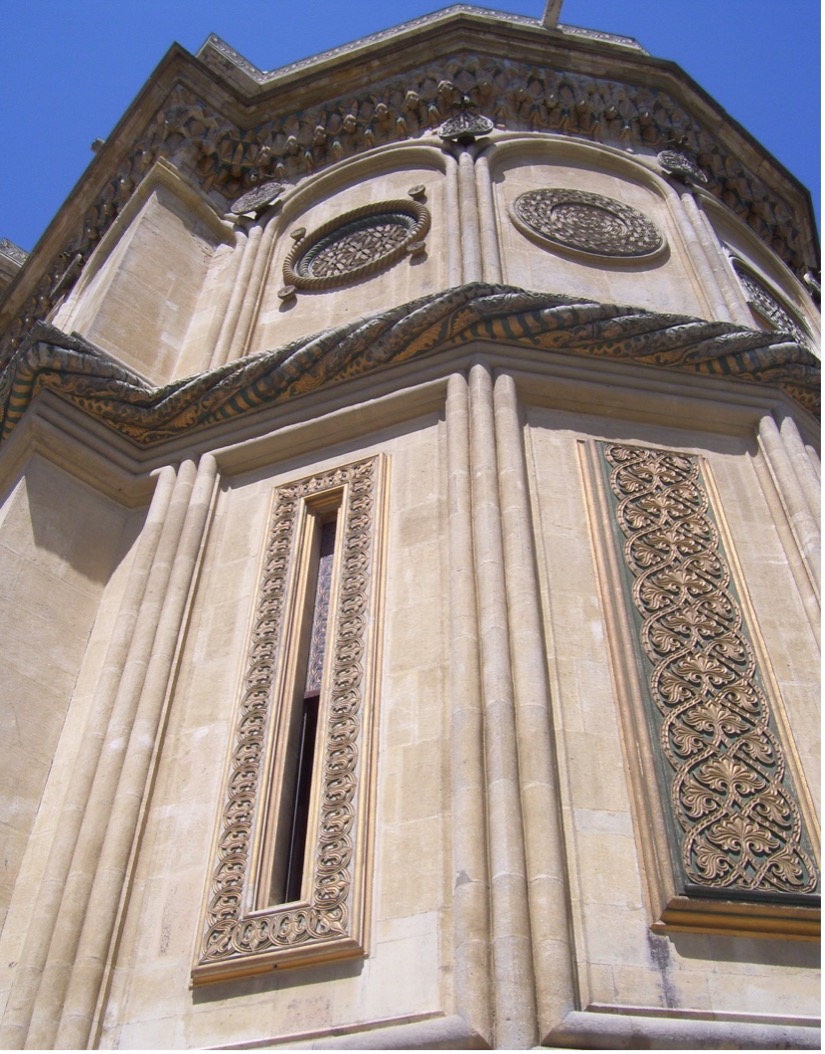 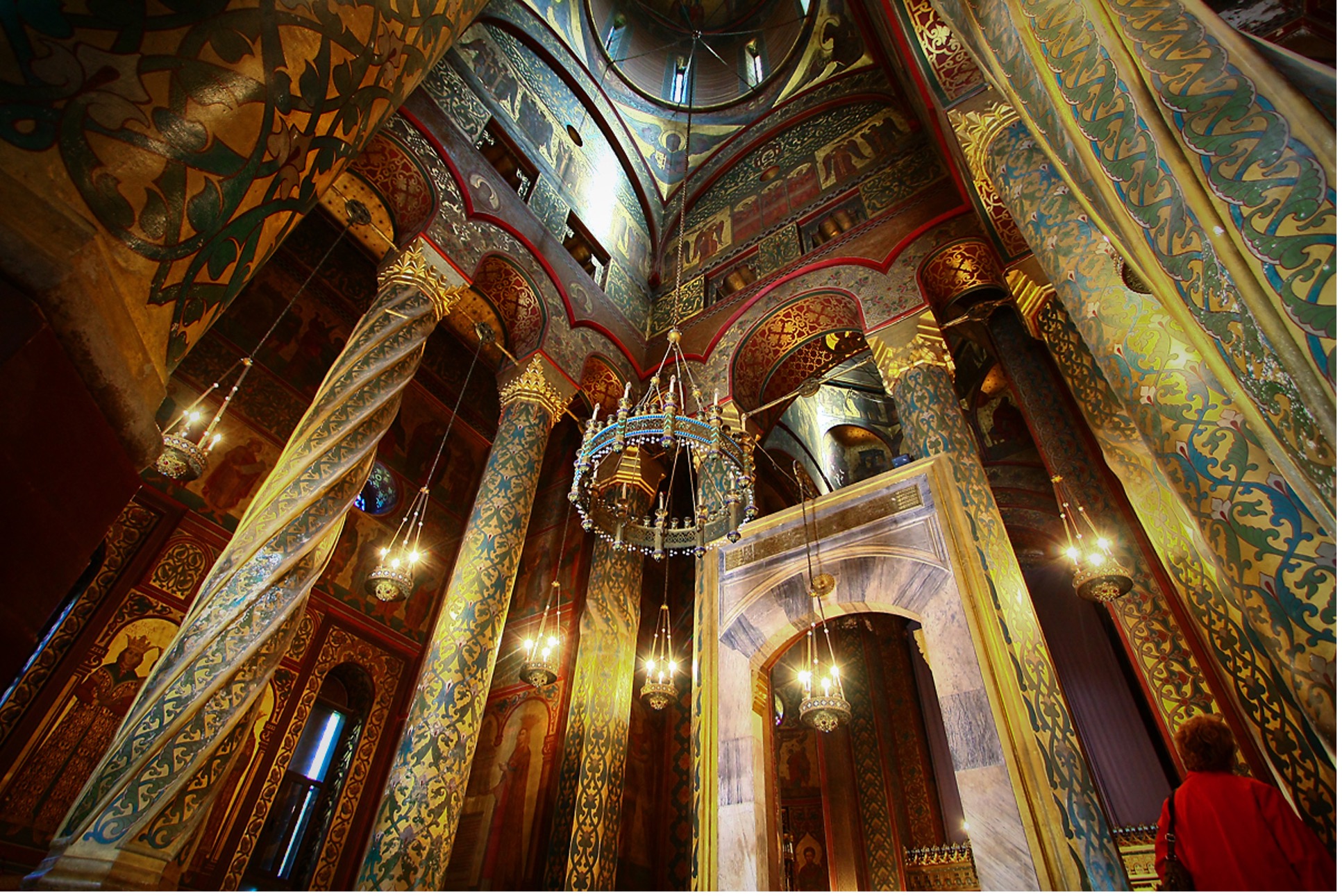 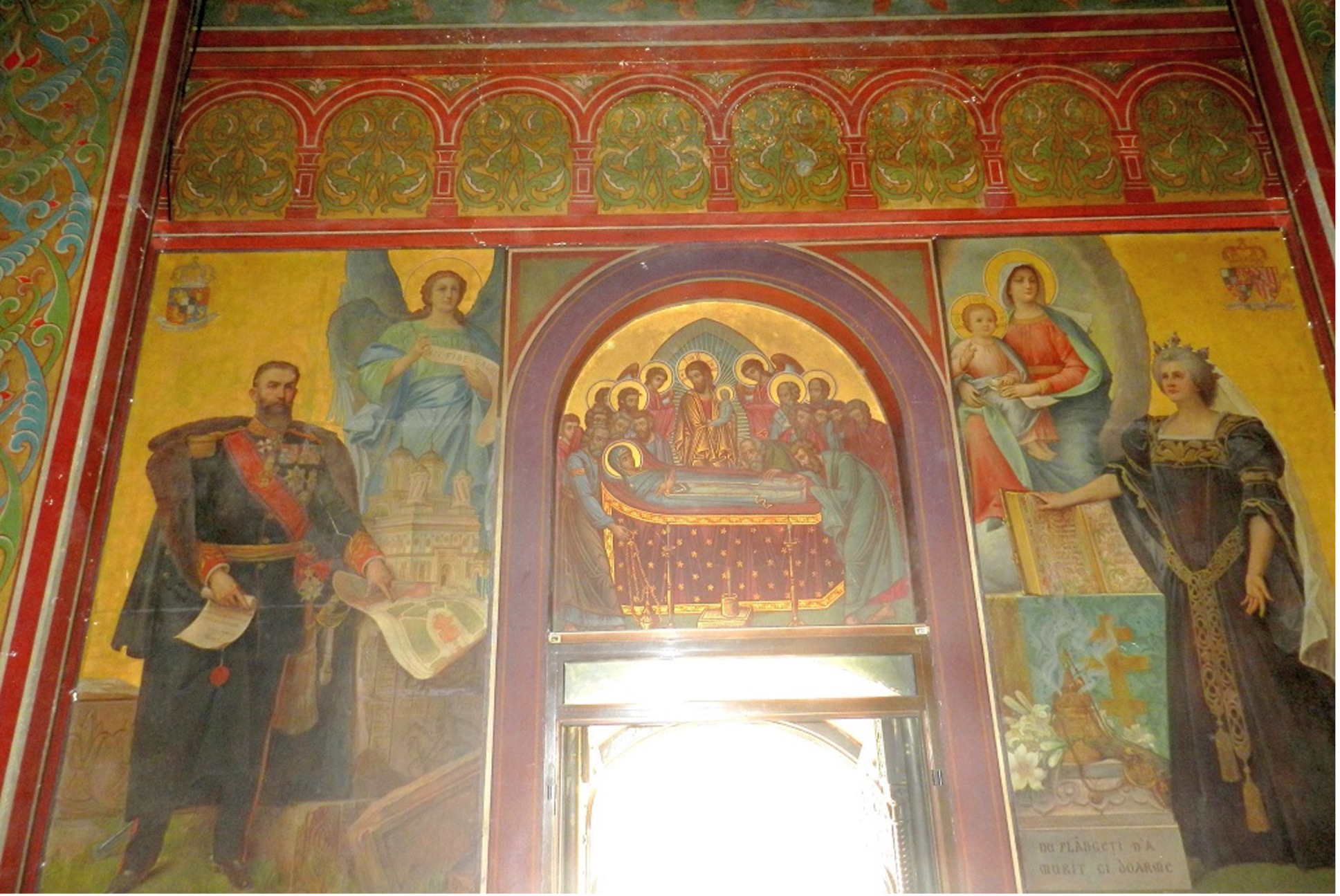 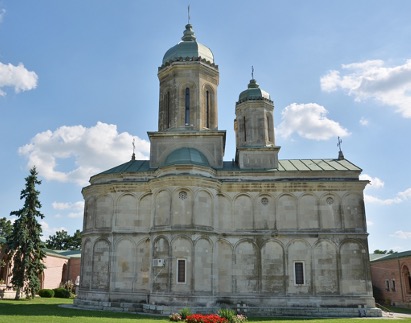 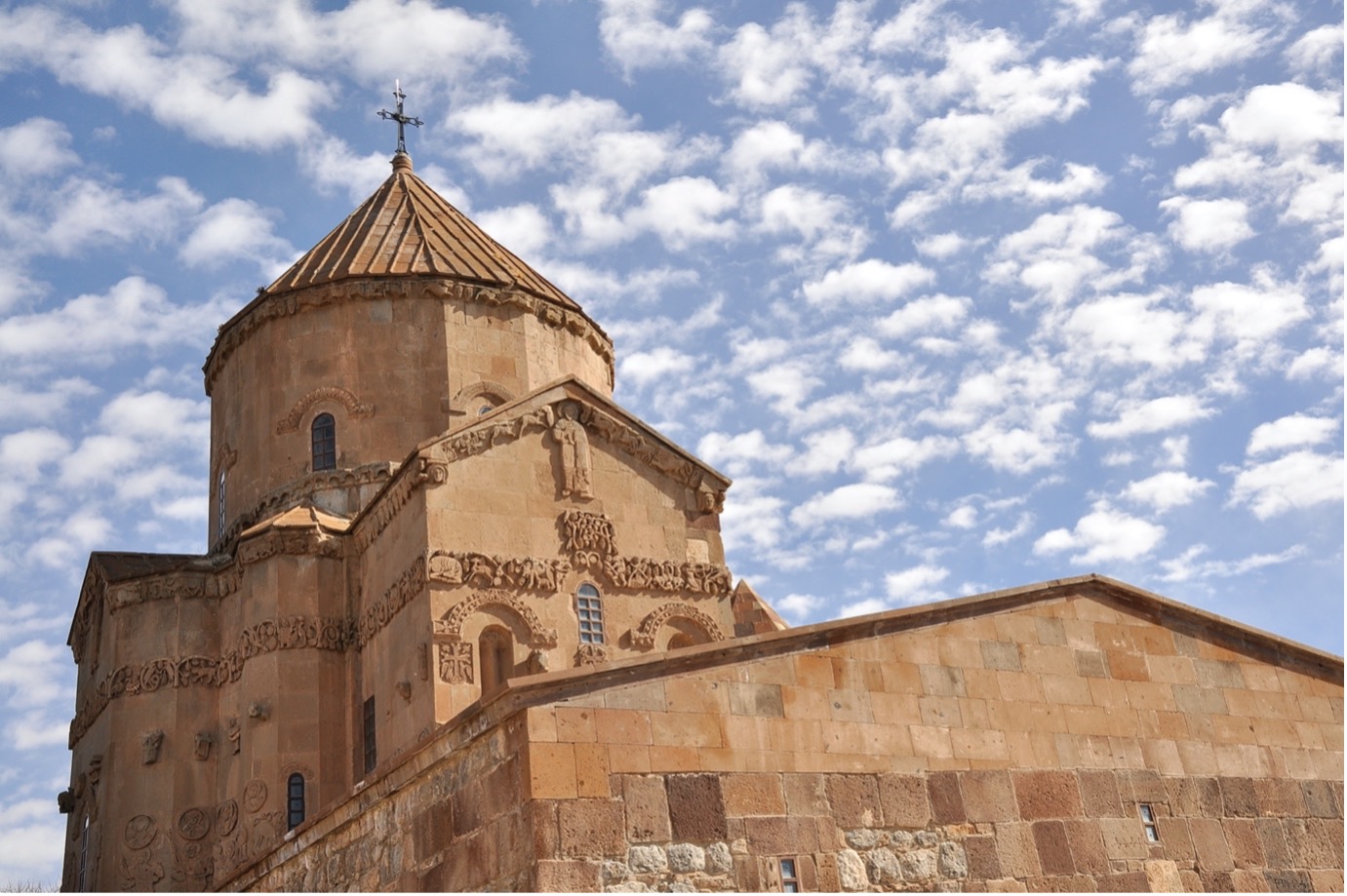 The early 16th-century church at Curtea de Argeș is situated on the valley of the Argeș river, in a hilly region, south of the Carpathian Mountains. This location is in the center of today’s Romania, in northern medieval Wallachia, and close to the southern border of the former Habsburg Empire. The construction of the church started in the first year of the reign of Prince Neagoe Basarab (r. 1512–21), while Wallachia was an autonomous principality under Ottoman suzerainty. It was finished relatively quickly, in 1517, and frescoes covering the whole inside surface of the church were later painted by Dobromir Zugravul, during the reign of Radu of Afumați (r. 1522–29).

The architecture of Curtea de Argeș and its exterior decorations have drawn admiration since the earliest chronicles and traveler accounts. Its walls consist of a vertical inside layer of brick and an outside layer of stone. The monument sits on a two-meter raised platform connected to the ground by a flight of stairs at the entrance, a feature that has drawn comparisons to a mausoleum. Its nave is surrounded by three apses, the central one serving as the altar, and bearing the eastern tower, the highest, in the middle. Unusual for an Orthodox church, the narthex is larger than the nave. It is square-shaped and another smaller square is formed in the middle by twelve columns that support a second central tower and two smaller and twisting western towers. The enlarged narthex was designed to host princely graves, namely that of Neagoe Basarab, his immediate family members and successors. But it was most probably also the setting for an original religious scenography, with chairs and double-sided icons (four of them still existing) placed between the twelve columns.

The most impressive part of the monument is its exterior decoration. A richly-carved middle cordon surrounds the façade and splits it into a lower and an upper sections. The lower part displays narrow windows with richly decorated stone frames, interrupted by either white or decorated marble slabs. The upper part is marked by a row of blind arcades, each containing a decorative stone disk and displaying further smaller disks each with bronze birds between them. The bird motifs were not just decorative. According to a medieval chronicler, the wind made the birds whistle and the small bells beneath them rang, creating a unique atmosphere around the exterior of the building. The cornice of the roof is marked by muqarnas-type ornaments, which are the beginning of extremely rich stone carvings, that cover the entire upper part of the church, including the roof and the four towers. The towers display the richest decorations, especially along the very thin windows, and culminating with the curved windows and window frames of the smaller towers that give them the unique, twisting impression.

The possible sources for the unique architecture of the church at Curtea de Argeș are diverse and illustrate not only the thriving artistic and cultural milieu of early 16th century Wallachia but also an interrelated artistic space that stretched from Eastern Europe and the Ottoman Empire to Russia, the Caucasus and beyond to Central Asia. The ethnic origins of the builder(s) have been the subject of intense speculations that reflect specific agendas and stereotypes of the authors. The earliest commentators have noticed the similarities between Curtea de Argeș and mosques, including most obvious the succession of arches on the cornice in the Muqarnas style and the front fountain, very similar to ablution fountains found at contemporary mosques in Istanbul. Did the masons hail therefore from the Ottoman Empire, the power that also exercised political control over Wallachia?

Romanian scholars of the 19th and 20th centuries, who struggled to overcome the Ottoman cultural heritage and fit Curtea de Argeș into a broader Romanian history of art, strongly disagreed with this point of view. They stressed similarities with other Orthodox monuments from the region: the ground-floor plan of the church, which they classified as a triconch plan (three apses around the nave) is specific to most Wallachian churches but also to earlier Serbian medieval monuments and to monasteries on Mount Athos in Greece. The middle cordon on the façade (brâu in Romanian), is a decorative element unique in the region to several Wallachian monuments, and first appeared at the nearby Dealu Monastery (built between 1499–1501).

Another popular theory, advanced by Romanian scholars, is that of Armenian or Georgian influences or builders, as seen mostly in the similar floral and geometrical motifs on the façade of Curtea de Argeș. Most of the time researchers have not been specific in their visual comparisons but see as an example that I found the 10th-century Church of Holy Cross in Akdamar in today’s Van in eastern Turkey. However, Armenian decorative motifs have long been seen as influential also for Russian medieval monuments. Among them, the late 12th-century Cathedral of St. Demetrios in Vladimir has rich stone carvings on the façade and also general proportions that are similar to the ones of Curtea de Argeș. But as shown in the contribution on this website about the Cathedral of St. Demetrios, the Russian monument has also been compared to medieval Serbian monuments, especially with Studenica Monastery. We have thus come full circle, back to the cultural milieu of the Balkans. What this brief set of visual comparisons show is that Curtea de Argeș might in fact be part of a visual culture spanning centuries and an impressive geographical distance, from Eastern Europe, the Balkans, passing through Russia, and all the way to the Caspic sea, Georgia and Armenia. The historiography of all these regions has struggled with adopting and adapting a firmly established Western conceptual apparatus, which has unfortunately obscured the complex transregional artistic relations and the overlapping or entangled natures of their artists and monuments.

Besides its artistic value, the church at Curtea de Argeș has a great symbolic value for Romanian culture, history, and the Orthodox Church. It is connected to the cultural and religious patronage of Prince Neagoe Basarab, hosts the remains of St. Niphon (death 1460), the first saint known to be canonization in Wallachia in 1517, and it is the setting for one of the best-known legends in Romania, that of Meșterul Manole (Master Manole). Manole was a master mason who, the legend goes, was commissioned to build the most beautiful monastery in the land by Prince Negru Vodă, the mythical founder of Wallachia. But for the building not to crumble he had to sacrifice his wife and incorporate her into the walls of the monastery. Similar stories, speaking of a great sacrifice of a master mason are to be found throughout the Balkan Peninsula, but this did not stop the legend becoming part of Romanian national folklore.

The church at Curtea de Argeș has undoubtedly become the most representative monument for Romanian heritage and artistic culture in the first decades after the formation of the modern state. It has been thoroughly restored by the French architect André Lecomte du Noüy (1844–1914) from 1875 to 1904, when the interior frescoes were replaced with vividly-colored neo-Byzantine ones, and when a grand Episcopal Palace was constructed meters away from the church. In spite of some interventions, the architecture of the church remained largely unchanged following the restoration. The works, that involved artists and architects from France, Italy, Germany, and Romania, illustrated the desire of the new state to present the historical heritage of Romania as part of the European one. The symbol of this drive to Europeanise Romania, King Carol (r. 1866–1914), also decided to be buried, together with his wife, Queen Elisabeth (1843-1916), inside the church, and have his official portrait painted next to that of the medieval founders, on the inside walls of the building. Nowadays, a new and larger episcopal church has been built near the historical monument, where the last two kings of Romania have been buried, Carol II (1893-1953) and Michael (1921-2017).

A richly illustrated catalogue with the remaining original frescoes from Curtea de Argeș (now on display in the National Museum of Art of Romania, Bucharest), including indications of their original location inside the church.

A very complex account of the artistic and architectural value of Curtea de Argeș. The book is mostly known for the description of the religious scenography that might have taken place initially in the church.

Minea, Cosmin. “The Monastery of Curtea de Argeș and Romanian Architectural Heritage in the Late 19th Century.” Studies in History and Theory of Architecture volume 4 (2016): 181–201.

A study about the rise of Curtea de Argeș church as a national symbol in late 19th century Romania, discussing the modern historiography about the monument, its restoration and display at universal exhibitions.

The same account about the rise of Curtea de Argeș church as a national symbol in late 19th century Romania written for a general audience.

The most recent and fair, albeit brief, account of the possible sources and influences for the architecture of Curtea de Argeș.

Negrău, Elisabeta. “The Structure of the Monastery Church from Curtea De Argeș. A Theological Interpretation.” European Journal of Science and Theology 6, no. 1 (2010): 59–66.

A discussion about the various theological interpretations of the architecture and interior space of the church.

This contribution was sponsored by the International Center of Medieval Art through the 2021 Advocacy Seed Grant.